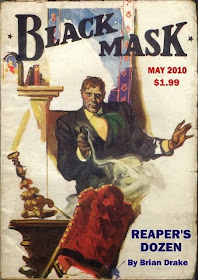 Is it Black Mask, or is it Brian Drake?

That’s the question you may be asking yourself as you read Reaper’s Dozen, the new hardboiled story collection available for download (for the mere pittance of $1.99) from Smashwords or Amazon.

Well, I wholeheartedly agree. Had these tales been written 80 years ago, Brian Drake may have taken his place as one of Shaw’s regulars alongside Frederick Nebel, Raoul Whitfield, W.T. Ballard and Paul Cain.

If you’ve read those guys, you know what to expect from Reaper’s Dozen. If not, a word of warning: These stories are not for the faint of heart. They’re fast, hard-hitting and tough as a two-dollar steak.

Drake gives us a nice blend of intriguing scenarios:
- A corpse so disfigured she can only be identified by a spider tattoo.
- A bride in a bloody wedding gown, twenty years late to the ceremony.
- An old pal who gets out of the slammer one day and lands in the morgue the next.
- A supposedly babe with a $200,000 bounty on her head.
- A pair of liquor store bandits who take the wrong man hostage.
- An unmarried man who gets a ransom note for his wife.
- A gambler who needs a bodyguard, and fills the position just a gunshot too late.
- A P.I. blackmailed into putting the squeeze on a politician.
- A priest hiring a gunman to bring down an underage sex racket.
And more.

You'll find surprises around every page, but you can sure of three things: The narration will be tight, the dialogue will be sharp and guns may go off at any moment - with deadly results. This book ain’t called Reaper’s Dozen for nothing.

Want a sample of Drake's diamond-hard prose? Check out his gripping tale, "The Red Ruby Kill" at BEAT to a PULP. And pay him a visit at Brian Drake Explains It All (if you dare).

Above: Artist's conception of Reaper's Dozen as it may have been designed by Joe "Cap" Shaw.
Below: Actual virtual cover. 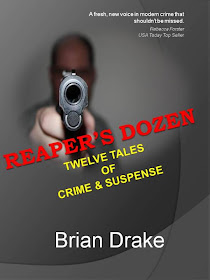