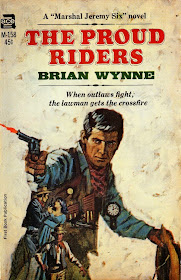 The Proud Riders is the fourth installment in Brian Garfield's saga of Marshal Jeremy Six, and the most complex story (so far) in the series. This time we get three protagonists and three major plots all rolled into one book. And all that sold, back in 1967, for a mere forty-five cents. My comments on the first three books, Mr. Six-Gun, The Night it Rained Bullets and The Bravos, are HERE.

This being Jeremy Six's series, the story begins and ends with him. Six, for those coming in late, was a skilled gunman who rode pretty close to the wrong side of the law before settling down to accept the position of Chief of Police in barely-tamed town of Spanish Flat, Arizona. Six is cast in the Matt Dillon mold, complete with his own Miss Kitty, the madame and proprietor of a cat house/saloon on the wrong side of the tracks. Like Dodge City, Spanish Flat also has a right side of the tracks, and a saloon (the Drover's Rest) where folks from all walks of life brush shoulders. 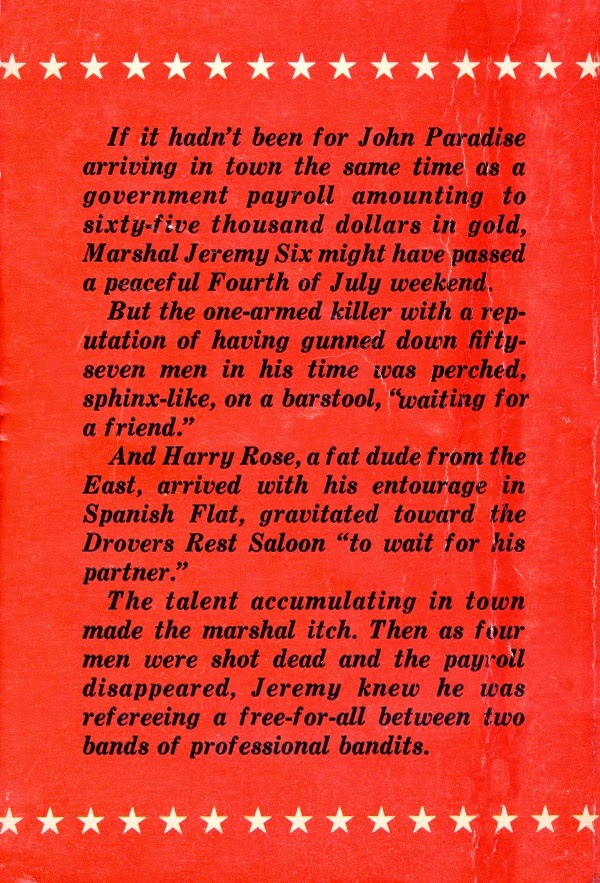 Protagonist number 2 is Matt Chavis, the guy who did his best to tame Spanish Flat before Six came on the scene, now married and making a go at cattle ranching. As the story opens, his herd has been rustled and Jeremy Six is failing to get them back. Chavis is now hard against it, and the bank is about to foreclose.

Enter John Paradise, hero number 3, who just happens to be an old pal of Chavis. Paradise is this book's version of Garfield's favorite character - the world-weary gunfighter who just wants to be left alone, but his reputation won't let him. When challenged, he kills without regret, not because he's bad, but because the years have burned all the regret out of him. What sets Paradise apart from others of his type is that his rep has already cost him his right arm. Not to worry, though, he's equally capable of killing with his left.

Plot number 1 involves a Fourth of July horse race, with a $500 prize and the chance to earn much more on side bets. Chavis resolves to capture and tame a particular wild palomino in hopes of winning enough to stave off the bank.

In plot number 2, the U.S. Army ships a $65,000 payroll to Spanish Flat, where troopers from surrounding forts will be sent to fetch it, but not until sometime after the Fourth.

And plot 3 is built on the uneasy relationship of Jeremy Six and John Paradise. Six hates what Paradise stands for, while Paradise wants to be friends, and the conflict remains in play until the last page of the book.

Among the guest players mixing it up with our heroes are a family of redheaded outlaws, an arrogant fat cat from New York City, a thoroughbred racehorse and his small but noble jockey.

And that's all I'm sayin', except that Garfield brings it all home, as usual, to a satisfying climax.
Evan Lewis at 5:00 AM
Share