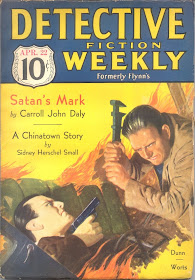 Detective Frank “Satan” Hall is in a hell of a fix. After slapping down a mobster called Gunner Krause, Satan lets his guard down a moment and is captured.

“And you’re going to take it right smack in the stomach. All seven shots, Satan. Right in the belly. You’re going to feel them; every one of them.” Krause’s voice rose as he talked, and there was hatred in it. “Every one of the boys will know you don’t live long after slapping me down.”

Trapped in the back seat of Krause’s car, hands manacled behind his back, Satan feels... The cold hand of death was on him. Funny, he thought. It was so real, as if icy fingers touched the back of his neck. He shivered slightly. The cushion felt as if it had lead in it; hard metal that bored into his back.

Krause pulls off the road and stops the car. “Well, do you get out yourself; or do I plug you here, open the door and let you drop out?”

Satan doesn’t answer, because his hand is suddenly clutching a gun.  Was he delirious? Where had it come from? Was it lying there on the seat behind him, and had it worked its way out with his moving body?

“Well?” Krause leaned over, his face close to Satan’s. “You’re turning yellow when the time comes, eh? Slap a guy down. Mark me! Satan’s Mark!” His lips were twisted; brutal. His eyes narrowed to two thin slits. And--and his gun was held in his right hand, close to Satan’s stomach.  “And that’s the end, Satan. Don’t want to look, eh?” This as Satan turned his head away. “Don’t want to take the dose of lead!” This as Satan swung his whole body, from the knees; swung it so that his back turned toward Krause; his right hand pushed well over on his left side, and the small black nose of the thing that right hand held slanted upwards.

Satan’s gun belches flame once, twice, three times. Krause’s mouth hangs open, hands pressed against his stomach, and he collapses. “He wanted it that way,” Satan says to himself. “A bellyful of lead.”

So where did the gun come from? Remember those icy fingers? They were real. Turns out the girl Satan has been trying to save from the mob had heard about the rub-out, and hid in the back seat, planning to shoot Krause herself. When her nerve failed, she thrust the gun into Satan’s hand.

The moral of the story? Never take Satan for a ride. But if you do, check the back seat for babes!

NOTE: For once, the artist didn't read the story. A) The car is not on fire. B) Krause hits Satan with his gun butt, but there's no monkey wrench in sight. C) Satan's hands are supposed to be manacled behind his back. D) What's that steering wheel doing in the back seat?

Our Satan Hall cover gallery is HERE.
Evan Lewis at 9:27 AM
Share