FRIDAY'S FORGOTTEN BOOKS (All of Them), PLUS The Heart of Ahriman - an unpublished classic by Bill Crider & Charlotte Laughlin! 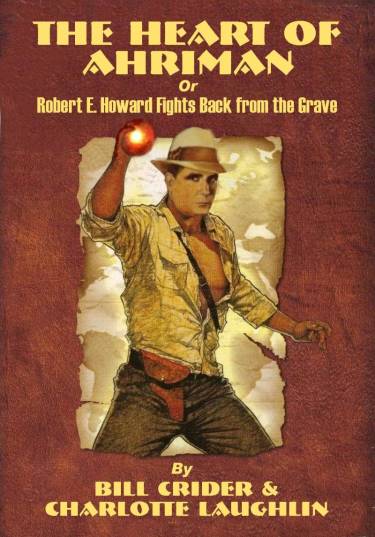 This week, I have the honor to substitute for Patti Abbott and keep tabs on today's collection of Forgotten Books. So before I tell you about the The Heart of Ahriman, here are the links . . .

Next, here are links to some of the other usual suspects. I'll try to keep an eye on them throughout the day, adding title and author info as their posts appear (or not).
Mike Dennis
Cullen Gallagher
Steve Lewis
Russel D. McLean
Juri Nummelin
David Rachels

If I've missed anyone, please let me know by commenting here or shooting me an email. Thanks!

Now, as to The Heart of Ahriman. It's not really a book. Yet. But it is a hell of a good novel, and the manuscript has been lurking in the shadows for 30 years, so I think it's about time it was unleashed upon the world.

It reached me like this: Some years back Bill Crider mentioned he'd co-authored a novel he referred to as "Robert E. Howard Fights Back from the Grave." I said I wanted to read it. (Jeez, who wouldn't??) I soon got an email saying Be careful what you ask for. The manuscript was attached. I promptly printed it up and set it aside for reading. Next thing I knew several years had passed and I found it in a box. This time I resolved to read it quick, before it vanished again. So I did.

Well. Bill and co-author Charlotte Laughlin did a great job. I was hooked on page 1. The story opens with a prologue taking us back to 1936, on what was previously believed to be Howard's last day on earth. Then we vault into 1978 to meet one of our two protagonists, a puritanical old man named Caleb Zerbe. Zerbe is tall and thin, wears a floppy hat and carries a walking stick with certain mystical powers. Sound familiar? Yep, he's sort of a modern day version of Solomon Kane.

Zerbe is seeking the ancient jewel of power known as The Heart of Ahriman, and he's not the only one. A gang of bad guys are after it too. Zerbe's goal is to destroy the Heart before it can inflict more evil on the world. The other guys are big fans of evil, and plan to take the Heart for a test drive.

Zerbe's quest takes him to fabled Cross Plains, Texas, where we meet our other protagonist, a young small town reporter named Jim Celis. (Jim, I'm pretty sure, is a reasonable facsimile of the 1978 model Bill Crider.)  Anyway, the Howard boom of the 70s is in full swing, and Jim's assignment is to dig up some new info from the locals and write an article on old Robert E. On the way, he's drawn into a junk yard and drives out with a 1935 Chevrolet. He doesn't know it yet, but the car's previous owner was REH himself.

The Heart of Ahriman, as you Howardians know, played a big part in the novel Hour of the Dragon. A gang of conspirators use it to resurrect the ancient sorcerer Xaltotun, seeking his help in kicking Conan off the throne of Aquilonia. Jim and Zerbe are convinced Howard had come into possession of the Heart and learned its secrets. So when they find it, they dig up Howard's grave and lay it on his chest, in hopes he has the knowledge to help them destroy it.

Much coolness ensues. This is a great adventure story, and it's a real treat seeing REH running around with Jim and Zerbe as they attempt to stop the bad guys. Howard's character is everything you'd expect: likeable, fearless, loyal and amused at life. In true Howard fashion, the tale takes us to ancient ruins, where we encounter a princess, a giant serpent and an unhealthy dose of sorcery. And, of course, the story comes to a roaring finish.

If any of this sounds familiar, you may have read the brief except published in the 2006 anthology, Cross Plains Universe (reviewed last week by George Kelley). The excerpt, retitled "The Stone of Namirha" to avoid conflict with Howard rights-holders, features only the resurrection and the introduction of the reborn REH. It's comprised of chapters 15-17 of the manuscript, and is really a very small part of the story. The complete novel runs 40 chapters.

It's time this baby saw the light of day!

Next week, Forgotten Books will be hosted by Kerrie Smith.
Evan Lewis at 6:00 AM
Share