FFB: The LINKS - and - GENIUS JONES by Lester Dent

I'm finally awake. I'll be adding more links as the appear. If I miss yours, shame on me. Please berate me here or at delewis1@hotmail.com. This is my first time hosting since the passing of Randy Johnnson and Ron Scheer and it gives me two empty feelings inside. 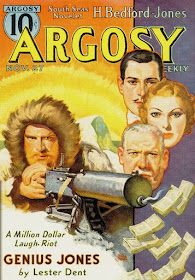 I've been a Lester Dent fan since 1964, when I picked up The Man of Bronze at the neighborhood Rexall Drugs. Since then I've read all but one of his novels (the impossible to find Lady So Silent), a bushel of stories and an armload of his Doc Savage adventures. But Jeez, I've never read anything quite like Genius Jones. Bottom line, it's some of the best Dent writing I've ever seen.

Genius Jones was serialized in Argosy in 1937, and was resurrected by Altus Press as one of the premier entiries in their new Argosy Library. (Another of those books was the exceedingly fine Sherlock of the Sagebrush, reviewed HERE.)

Here's the set-up: A man named Jones, who's spent his entire life on an iceberg, is finally found and rescued. For most of his years, Jones' only company was a crazy man and liibrary well-stocked with dictionaries. He knows a lot about a whole lot of subjects, but absolutely nothing about human interaction.

One of the first humans he meets is an eccentric, evil-tempered millionaire who sees in Jones that rarest of things: an honest man. The millionaire, Polyphemus Ward, makes him a hundred thousand dollars and a challenge. If Jones can give a thousand dollars to a hundred deserving people, Ward will give Jones a million, and a permanent position doling out his vast fortune to other needy parties.

What follows is hard to fit into a box. There's a murder, but this is not a mystery. There are elements of adventure, but it's not that either. There's comedy, romance, philososophy and social satire, too. What it all boils down to is one hell of a story, elegantly told.

Here are some samples. Yeah, there are a lot of them, but there's a whole lot more like them. Some of these are reminiscent of lines in other works, and some aren't.


Experience is not the gentlest instructor, nor the best, nor the most welcome, since the fellow who has experience teach him something generally comes away with his ears red. But he has had a lesson nailed fast to the inside of his skull, even if it wasn’t pleasant. Experience is an effective old girl.

As he regarded them, he seemed divided between joy and uneasiness, like a young man ready to propose marriage for the first time—he had worked up to it with pleasure, but the future angles had him jittery.


“What a primitive person this Jones is,” Glacia murmured. “Insufferable, of course, but amusing in his crude way.”
Polyphemus Ward exploded a snort. “Amusing!” he grunted. “So is a barrel of firecrackers—as long as you light ‘em only one at a time.”

He was a homely as sin, had a tongue like a bullwhip, and his mind could grasp facts and figures and lay them out as though he was using bricks to pave a road for himself.

Glacia was a strikingly beautiful and calculating piece of glass …

Seeing Glacia for the first time was like happening upon an acre of diamonds.

(after kissing Glacia)
Jones felt something go down to his toes. It came up again. Whatever it was, it was new, and he hadn’t imagined there were such things. Each individual hair on his head seemed to get up on end and shake.

There was a small animal of caution trying to warn Jones, but the kiss drove it scurrying away.

Glacia had happened to him rather fast, had half convinced him that women were lightning that struck you before you could dodge.

A jump was the natural thing when Polyphemus Ward spoke—he had a way of sounding like an automobile accident happening.

Having pulled his courage out of his boots, whence it had fled, Funny Pegger moved on down the deck.

Jones was strolling down the deck. Jones wore exactly what he had been born in.

“Goodness,” Jones said. “Do you suppose I will have some trouble?”
“You,” Funny Pegger assured him, “were made for trouble to roost on.”

His mind hunted for methods, and because of a combination of circumstances, his mind had become something of a mad dog among minds.

“She’s got no more money than a grasshopper has pants.”

“God made the earth, and rested. God made man, and rested. Then God made woman, and neither man nor earth has had a minute of rest since.”

Yesterday he had been as popular as an ant in Glacia’s consumme, but last night she had taken a great interest in him.

He began to experience a doubt that was a sort of spike-tailed devil. Soon there was to be a herd of them.

Janice, at eighteen, was a breathlessly beautiful creature with a temper like a bobcat, determination to have her own way in everything, and no more real human emotions than a firecracker.

The girl was a diminutive, auburn-haired dynamo in a streamlined mounting.
A series of collisions between his feet and the sidewalk revived Jones and he realized that he was following the titian-haired girl.

(He) glanced sidewise at her, but could tell nothing from her face. His inspection accomplished nothing but a great tumult within him—parts of his interior seemed to jump around and other parts go into a cramp.

Jones wished she wouldn’t act as if he was something which needed pursuing with a fly-swatter.

She wanted to bite him with words.

(She) came back with two apples, one of which she handed to Funny Pegger, who inspected it and found a wormhole which looked as though it was inhabited.
“Here, you take this one,” Funny said. “I’m a vegetarian.”

Vix parted her lips, plainly having a great deal to say, but instead of saying it, she squealed, for Jones had picked her up bodily. Vix’s pert face became a racetrack for emotions, all of them life-sized, as Jones carried her toward the door.

Internal commotions were things with which Jones had very little experience. Up to the moment of quitting his iceberg, the problems of his daily life had been almost wholly external. Food. Shelter. Defense from unfriendly animals. But things had changed almost overnight. Having exposed his outer shell to the complications of civilized existence, he had found that things could go on in the inner ego that were fully as violent, intricate and astonishing. He had kissed Glacia and his heart had got into an elevator and swooped dizzily around his insides. He held a red-haired girl in his arms and even more sensational things happened. A munitions factory had just blown up in his stomach. Star shells ascended, screaming, to his brain.

He had intended to tackle his difficulties with brains. He had noticed, in comparing himself with other men, that he had more than an average share of brawn, but the amount of brains were more ethereal, the quantity he possessed more difficult to measure. His thoughts, plodding around, began to stir up the resting animals that were his troubles, so that he saw them in a milling pack, and distinguished their teeth. He was awed.

Glacia knew only one of them: Paul Shevinsky, the criminal lawyer; and she shook his hand, which was something like taking hold of a live toad.

Polyphemus Ward’s daughter had left him because she was afraid his contrariness was contagious. She’d vanished; gone off to get human, like other people. And if she stayed away long enough it might be that Polyphemus Ward would get human, too.

(He) sat with his fingers fastened to his knees and his mind stabbing itself with thoughts.

Events had turned into rabbits that were coming too fast out of the magician’s silk hat.

Funny Pegger got there first with a chair, and turned Lyman Lee’s profile into a difficult job for a plastic surgeon.

Jones describes the happy ending of his saga thusly:

“The word grin,” he announced, “means, variously, a noose for hanging persons, a trap, or an instrument of torture, as well as to draw back the lips from the teeth to show merriment or good humor. Er—the latter is my present impulse.” 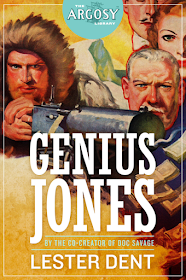 Get Genius Jones HERE!
Evan Lewis at 5:00 AM
Share